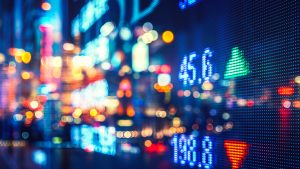 Market volatility has once again intensified over the past several weeks, particularly after the last FOMC meeting. Although there is much controversy about whether the economy can emerge unscathed from the increasingly tightening monetary policy onto a so-called “soft landing,” the financial markets appear to be pricing in an impending recession as a new base-case scenario. The S&P 500 has entered bear-market territory once more after losing 2.91% for the week. Overall, its value has descended by 23% for the year. This past week, the Dow Jones Industrial Average (DJIA) matched the S&P 500, losing 2.92% while the total stock market index fell 2.64%. The Nasdaq Stock Market Composite came down 2.69% while the NYSE Composite lost 2.35%. The CBOE Volatility index rose by 5.68% for the week.

The past week was the third consecutive weekly decline of the bourses. Consequently, the yield on the benchmark 10-year U.S. Treasury note breached 4%, albeit briefly, for the first time since 2008. This is expected to bring bond prices down to record levels since bond prices and yields move in opposite directions. The stock market’s biggest move came on Wednesday in response to a surprise decision by the Bank of England (BoE) to purchase long-dated UK government bonds. This move by the BoE triggered extreme volatility before the start of trading on Wall Street, although a silver lining was the easing of recent upward pressure on interest rates and the U.S. dollar, which caused a rally for stocks as the result. There was also some positive news concerning results in a large-scale trial of Biogen’s Alzheimer’s treatment, sending the pharmaceutical company’s shares surging upward by 40% and providing much-needed support to the market.

It may be a source of some comfort to note that despite attempts to deny it, expectations of an imminent recession have well been sounded off by market participants, including Federal Reserve Chairman Jerome Powell. The Chair noted in his last press conference that chances for a “soft landing” are gradually diminishing as the central bank continues to tighten policy or keep it aggressively restrictive over a longer period. The focus is therefore shifting from whether a recession is coming, to when and how deep the potential economic downturn could be.

Although some positive developments in the pharmaceutical sector created a buying opportunity on Wednesday, the markets reversed their gains the following day. The sell-down was tempered by the release of data indicating weekly jobless claims fell to 193,000, well below consensus expectations and their lowest level since late April. The news shows continued resilience in the economy. Other data pointed to inflationary pressures despite tightening monetary policy. The Fed’s preferred inflation gauge, the core (less food and energy) personal consumption expenditures (PCE) price index, rose at an annualized rate of 4.7% in the second quarter. The figure well exceeds expectations of 4.4% as well as the Fed’s long-term inflation target of 2.0%.

Feeling the immediate impact of the Fed’s rate hikes is the housing sector, as seen in the rising mortgage rates that breached an average of 7%. But the evidence was also mixed for this sector. New home sales rose nearly 20% in August to hit a five-month high. However, pending sales of both new and existing homes, where contracts have been signed but not closed, fell slightly. The Case-Schiller Home Price Index declined by 0.24% in July, the first time the indicator retreated since early 2012. Prices slowed from June to July on a year-over-year basis, at the fastest pace in the history of the index.

The gold market has fallen for six months straight without a substantial rally, bringing the bearish sentiment to its highest in four years among investors. In the metals market, commodity analysts downgraded their gold prices for 2023 by 6%, and their silver prices by 11%. Historically, however, the negative sentiment toward precious metals has never proven to be sustainable. After the period April to September 2018, the last time the gold market declined for six months consecutively, gold went on to build a strong uptrend that ended with the prices establishing a new record high above $2,000 an ounce. The same pattern appears to be forming now in gold’s bearish speculative positioning, its highest level since December 2018. While the consolidation may take some time, investors are likely at some point to recognize the value opportunity building in precious metals.

The fluctuation in oil prices during September is not an unusual event as this month is the season when hurricanes ravage the U.S Gulf of Mexico. This fact notwithstanding, Hurricane Ian did not affect crude prices significantly despite the grave damage it wreaked in Florida and other southeastern states. While there occurred some pricing upside from U.S. stock draws, a new batch of Iranian sanctions, and some slight weakening of the U.S. dollar, the next important determinant of oil prices will be the OPEC+ meeting that is scheduled for the 5th of October. An upward run towards $100 may be in the future for ICE Brent, with production cuts being discussed by the oil cartel as a means of maintaining prices within an attractive bandwidth. According to OPEC+ sources, members of the oil group have begun discussions about potential cuts in oil production beginning November 2022 as Russia has already proposed a target reduction of 1 million barrels per day for the October 5th meeting.

For the report week beginning September 21, Wednesday, and ending September 28, Wednesday, the Henry Hub spot price declined by $1.38 from $7.99 per million British thermal units (MMBtu) to $6.61/MMBtu for last week. Concerning the Henry Hub futures prices, the October 2022 NYMEX contract expired on Wednesday at $6.868/MMBtu, down by $0.91 from one week earlier. The November 2022 NYMEX contract price descended to $6.955/MMBtu, lower by $0.87 for the week. The price of the 12-month strip averaging November 2022 through October 2023 futures contracts lost $0.50 to end at $5.741/MMBtu. At most locations this report week, natural gas spot prices fell, with week-over-week decreases ranging from $0.70 to $2.00 at most major pricing hubs.

European stock prices plunged amid disappointing corporate earnings and concerns of a coming recession. The pan-European STOXX Europe 600 Index closed the week down by 0.65% in local currency terms. Italy’s FTSE MIB Index lost 1.98%, Germany’s DAX Index dropped 1.38%, and France’s CAC 40 Index slid 0.65%. The UK’s FTSE 100 Index declined by 1.78%. UK government bond (gilt) yields closed higher after they underwent historic swings resulting from the new UK fiscal plan announced last Friday. The plan proposed large tax cuts, energy subsidies, and sizable borrowing. At the beginning of the week, yields rose sharply amid worries of a serious deterioration in the public finances, but then eased after the Bank of England (BoE) declared that it would make temporary purchases of long0dated bonds “on whatever scale is necessary” in attempts to “restore orderly market conditions.” Core eurozone bond yields fluctuated, ending higher mostly in tandem with UK gilts. Some upward pressure on yields was exerted by higher-than-expected inflation in Germany later in the week Core markets were broadly tracked b peripheral eurozone bonds.

Japanese equities began the week on a downtrend and by the end of the week, they finished as they began. Japanese shares ended at a three-month low even in the face of some positive economic news. The Nikkei average fell 4.5% to 25,937, its lowest close since July 1. Also finishing down is the broader TOPIX benchmark, which closed at 1,836, about 4.2% from where it began for the week. The further strengthening of the U.S. dollar against Asian currencies continued to dampen market sentiment. The Bank of Japan (BoJ) released the minutes of its meeting on monetary policy last Wednesday. The policymakers voted overwhelmingly to maintain a negative benchmark interest rate of -0.1%, signaling a further divergence from the U.S. tightening policy. The BoJ also confirmed that it will continue to purchase Japanese government bonds (JGBs) at the necessary amount without setting an upper limit, to keep the 10-year JGB yields to remain at approximately zero percent. Because of this, the yen weakened further against the U.S. dollar midweek. The yen recovered slightly later in the week as the U.S. dollar somewhat withdrew. The end ended in the mid-144 range against the dollar by the week’s end. The 10-year JGB yield ended the week at 0.247%.

Stock markets in China were weighed down by currency weakness and signs of a flagging economy. The broad, capitalization-weighted Shanghai Composite Index fell 2.1% and the blue-chip CSI 300 Index, which tracks the largest listed companies in Shanghai and Shenzhen, lost 1.4%. The yuan traded at 7.0898 per U.S dollar at the close of the week, slightly stronger than the 7.1066 per USD rate at which it traded one week earlier.  On Monday, the currency fell to a 28-month low, at which rate it lost more than 11% against the greenback for this year. This trend has the yuan on track to register its biggest annual loss since 1994 when China unified its official and market rates. Like the currencies of other emerging markets, the weakness in the yuan is being caused by a surging U.S. dollar that continues to gain strength as the Federal Reserve continues to pursue its aggressive interest rate hikes. As for the rest of the Chinese economy, profits at industrial firms contracted by 2.1% in the first eight months of the year compared to the same period one year ago, versus a 1.1% decline in the first seven months of the year.

Among the important data scheduled to be released this week are consumer credit, hourly earnings, and job openings. 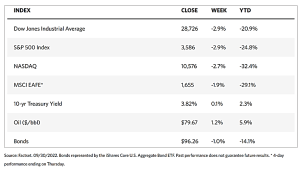 BlackRock CEO Says ‘Next Generation for Markets’ Is Tokenization

Bitcoin fell back below US$17,000 in Friday morning trading in Asia. Ether and all other non-stablecoin...
Read more
Stocks To Watch

A global slowdown in initial public offerings due to heightened market volatility and a regulatory cloud...
Read more

Researchers create green fuel with the flip of a light switch