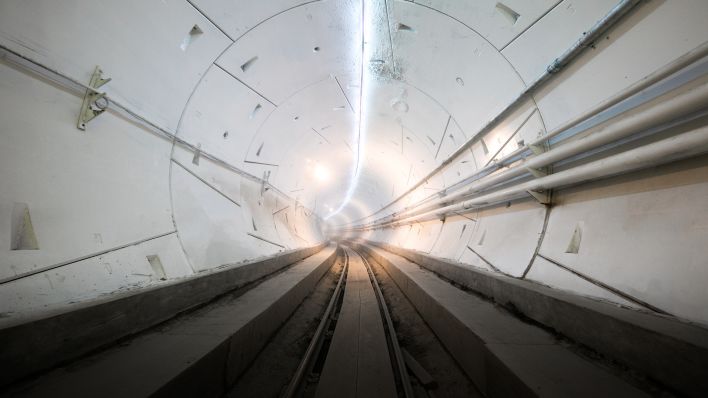 With a modified Tesla Model X zipping through a Boring Company tunnel Tuesday night, Elon Musk took the wraps off his vision of a high-speed tunnel system he believes could ease congestion and revolutionize how millions of commuters get around cities.

“I thought it was epic,” said Musk as he described how he felt being whisked through the Boring Co.‘s demonstration tunnel. “For me it was an epiphany, like ‘this thing damn well worked.’”

Musk, who founded the Boring Co. two years ago after complaining that traffic in Los Angeles was driving him “nuts,” says the demonstration tunnel cost approximately $10 million to complete. Engineers and workers have been boring the 1.14-mile-long tunnel underneath one of the main streets in Hawthorne, California. One end of the tunnel starts in a parking lot owned by Musk’s Space X. The other end of the demonstration tunnel is in a neighborhood about a mile away in Hawthorne.

During his Tuesday evening presentation, Musk described the Boring Co.’s tunnels as “an actual solution to the soul-crushing burden of traffic,” laying out the ways they could be integrated into cities to one day make transportation faster and easier.

Tuesday afternoon, the Boring Co. gave reporters demonstration rides through the tunnel in modified Tesla Model X SUVs, going between 40 and 50 miles per hour. Engineers have attached deployable alignment wheels to the two front wheels of the Model X. Those alignment wheels stick out to the side of the main wheels and act as a bumper along the track walls inside the tunnel, keeping the Model X on course and preventing the vehicle from running into the side walls of the tunnel.

“If driver passes out or goes crazy those tracking wheels ensure the car stays on track,” said Musk.

While the Boring Co.’s first tunnel may be complete, it is far from being finished. The surfaces are bumpy and have yet to be smoothed out. As a result, the demonstration ride, for now, is rough and passengers in the Model X definitely feel the alignment wheels bumping into the track walls to keep the SUV on course. Musk has talked repeatedly of boring a series of high-speed loop tunnels in major cities to ease congestion.

In June, the Boring Co. signed a deal with the City of Chicago to develop matching 17-mile, high-speed transit tunnels between the city’s business district and O’Hare Airport. When he announced the deal, Musk envisioned it taking no more than three years to dig the tunnel and breaking ground on the project within three to four months, but more than a half year later, the project has yet to receive approval from government and regulatory groups.

That raises the question of whether the Boring Co. can dig and develop high-speed loop tunnels as quickly as Musk promises.

“I would be surprised to see the tunnel in Chicago happen in the near future,” said Foster Finley, global co-head of the transportation practice for the consulting firm AlixPartners. Finley says engineers come across all kinds of things digging a tunnel including utility lines, aquifers and sorting out property rights. His point: It often takes longer and is costlier than expected to dig a tunnel.

“An elevated train from downtown Chicago to O’Hare would be easier and cheaper to build,” said Finley. Musk disagrees. He says the high-speed loop tunnels are a far better way to solve the traffic jams that regularly snarl traffic. “We think this is a solution that will actually work,” he said.

Several major brands have decided to sit out of the Super Bowl this year. Budweiser, Coke and...
Read more
Top News