How investors can stay balanced in a seesawing stock market 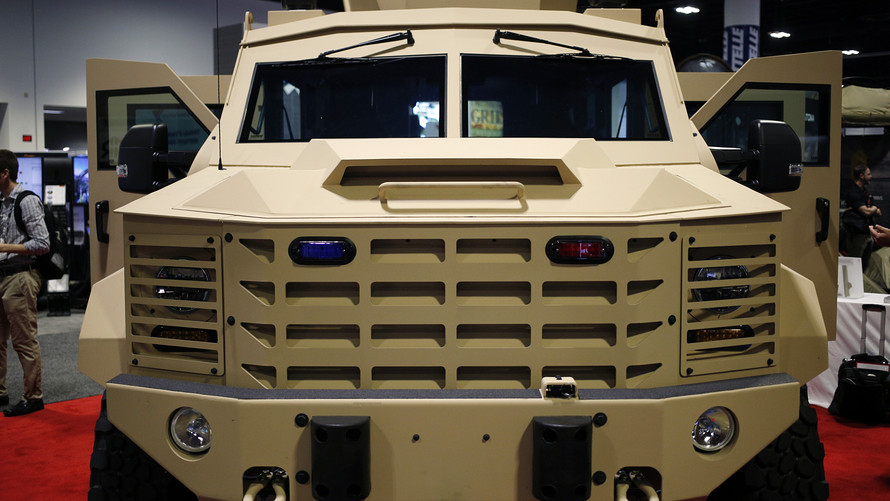 A balanced fund may seem like a boring idea, but if you were disturbed by the swings in the stock market during October, it’s an approach you should consider. It’s possible to avoid a lot of volatility and sleep better at night, and in a crisis scenario recover much more quickly than the overall market.

The $16 billion Janus Henderson Balanced Fund’s class I (institutional) shares JBALX, +1.44% and class T shares JABAX, +1.41% have five-star ratings (the highest) from Morningstar. Marc Pinto, a portfolio manager with the fund since 2005, described how the management selects securities and adjusts the portfolio to manage risk and take advantage of special opportunities. The mutual fund generally holds about 60% stocks and 40% bonds.

In an interview, Pinto pointed to the fund’s performance through the 2008 financial crisis (shown below) to illustrate the benefits of a balanced and flexible strategy.

“We think this fund can make a lot of sense for an investor who knows they need equity exposure to meet their retirement needs, but fears taking equity exposure at the worst possible time and feeling like a fool,” he said.

Active portfolio management strategies have been losing ground for years, as the bull market — dominated by very large successful technology companies — and low-cost index funds have made passive approaches very attractive. The strength of a company such as Amazon.com AMZN, +6.86% with a market value of $814 billion, making up 3.5% of the weighted S&P 500 SPX, +2.12% is wonderful when the internet retail pioneer’s shares rise 71%, as they did during the first nine months of this year. But shares of Amazon dropped 17% in October, when many high-flying tech stocks were hammered.

Pinto said “over a 15-year period we have delivered S&P-type returns and have done it with a beta just under 0.6, relative to the S&P. We have given market-like returns, with less than 60% of the risk.”

The Janus Henderson Balanced Fund has several share classes. The class I shares have the lowest annual expense ratio of 0.65% and are available with low minimum balances through many brokerage companies and investment advisers. The class T shares can have an annual administrative fee of up to 0.25%, making for a total expense ratio of 0.90%, according to Janus Henderson.

The fund has easily outperformed its category for all periods. It has underperformed the S&P 500 during the ongoing bull market. However, considering its management style, it has fared quite well against the index for the 15-year period.

Management and moves to reduce risk and jump on opportunities

The fund generally holds about 60% stocks and 40% bonds, though the mix changes depending on market conditions. “[M]aking deliberate changes in allocation is an important tool we have to supplement returns for outperformance of the equity and fixed-income sleeves,” Pinto said.

“When we look at volatility today, or more dramatically in 2008, in difficult market time periods, we have navigated those extremely well, and our downside capture has been strong relative to the S&P 500 and competitive when compared to our peer group,” he said. “In 2008, we were down 15%, the market was down two-and-a-half times that and our peers were down an average 20%.”

This chart showing returns for the S&P 500 and the Janus Henderson Balanced Fund’s class T shares illustrates Pinto’s point — the ride was far less rough for the fund from the end of 2007 through the end of 2009: 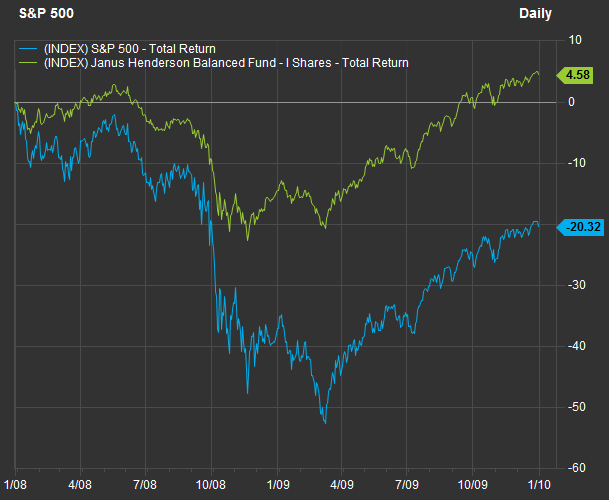 Pinto said he and his colleagues focus on three areas of performance, including “outperformance on the equity side,” which he said has been the biggest driver of the fund’s overall success.

The other two areas the managers stress are selection of fixed-income securities and asset allocation.

Within fixed income, the managers will lean toward corporate credit when the economy is strong and move more toward U.S Treasury securities during times of turmoil in the market. “So this means finding good ideas in investment-grade and high yield, and knowing when to get out of one fixed income sector and emphasize another,” Pinto said.

Altering the fund’s asset allocation “allows us to be defense when need be,” Pinto said. During 2008, the fund shifted to an allocation of about 60% debt and 40% equity, the opposite of what it normally does, and you can see in the chart above how well this move worked out. Digging a bit further, “it was a combination of not only increasing the fixed income mix, but taking a very defensive posture within that, holding a lot of Treasurys and very little agency paper,” Pinto said. By “agency paper,” he meant mortgage-backed securities issued by U.S. government agencies, including Fannie Mae and Freddie Mac.

Pinto said that even before the 2008 mess, his colleagues on Janus Henderson’s fixed-income team were “seeing signs of trouble in the RMBS [residential mortgage-backed securities] market.” This was an important example of how indications in one market can signal very difficult times in another. This lead to the “trimming” of positions in shares of financial services companies late in 2007, he said.

Then once it was clear that the federal government would not allow any more large banks to fail, the Janus Henderson Balanced Fund began load up on shares of large U.S. banks.

When asked about what adjustments the fund was making recently, Pinto said disclosure rules prevented him from discussing any moves made after Sept. 30. But he did say that starting late in the second quarter and through the third quarter, the fund’s equity exposure had been declining, and that the overall portfolio was being “modestly de-risked.”

One way the fund reduced risk through the end of the third quarter was to sell some shares of Boeing BA, +1.51% “which we still like, but was our largest position,” Pinto said. “As the stock goes up it is relatively less attractive, although they have done a good job brining earnings higher.” Boeing was the fund’s fourth-largest equity holding as of Sept. 30.

Another position that the fund trimmed was Adobe ADBE, +5.35% The maker of Photoshop software has been successful in its transition to a subscription model, and the fund’s managers felt the stock had risen enough for it to be time sell some shares.

Pinto also said the fund had “trimmed a little bit” of its Microsoft MSFT, +3.94% position, again because of the company’s success. “We are very bulled-up on it. 15% revenue growth and 19% EPS growth,” he said. Microsoft was the fund’s top holding as of Sept. 30.

“We have tried to create all-weather portfolios. We want stocks that make a compelling case but don’t necessarily correlate with each other,” Pinto said, before naming a company that certainly doesn’t correlate with the ones listed above: Altria Group MO, +0.77% “The greater regulatory scrutiny of e-cigarettes has caused some concern, but it has been a very consistent company with cash flow, increasing the dividend and otherwise returning capital to shareholders,” he said.

When asked about areas where he sees opportunity, even after the fund got more defense through the third quarter, Pinto pointed toward the consumer staples sector and “some areas within health care.”

Managed care and device manufacturers have been performing well, even as the sector “has had a relatively tough go in the therapeutic area,” Pinto said. He favors Medtronic MDT, +1.74% and has been “taking a close look” at AbbVie ABBV, +3.94% which was down 11% for 2018 through Nov. 5. “We trimmed it but didn’t sell,” he said.

IMF says the outlook for the global economy ‘remains sluggish’ as...

Snap’s IPO may benefit investors after all

How to buy gift cards for friends and family that won’t...