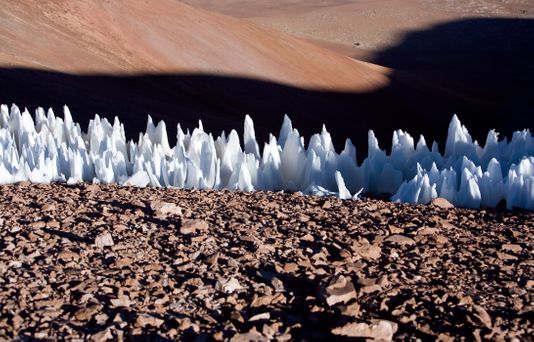 If you’re planning a trip to Jupiter’s moon Europa, be prepared for a rough landing.

In a study released Monday, scientists say they’ve found evidence of huge, jagged “ice spikes,” some 50 feet tall, on the moon’s surface. They spikes would “pose a hazard to any future space mission landing on the moon,” according to the study.

The spikes could be similar to “penitentes” down here on Earth, like those found in the higher elevations of South America.

“In extreme cold and dry conditions on Earth, such as those encountered in the Andes, the sun’s rays can cause parts of the ice and snow to undergo sublimation – becoming water vapor without melting first,” the study said. This process leaves behind distinctive, blade-like formations called penitentes.

Although scientists have not seen the spikes there, a similar process likely occurs on Europa, the study suggests.

Evidence of penitentes has also been seen on Pluto, suggesting that such jagged terrains may be common on icy worlds – including Europa.

On Europa, these spikes could be as close as about 20 feet apart, creating a “treacherous terrain” for potential landing craft.

Due in part to its salt water ocean, Europa is one of the more promising candidates for extraterrestrial life in our solar system, NASA said, so the moon has been targeted as destination for a future space mission.

“Beneath the icy surface of Europa is perhaps the most promising place to look for present-day environments suitable for life,” NASA said. Scheduled to launch in the 2020s, the Europa Clipper mission would arrive at Jupiter several years later and try to see whether the icy moon could harbor conditions suitable for life.

During an interview at a Reuters conference, the ECB’s President, Christine Lagarde, noted that bitcoin had some...
Read more
Top News

President-elect Joe Biden’s inauguration next week is expected to usher in a more traditional and normal presidency, and...

The Exynos 2100 is just playing catch-up to Qualcomm, which is...

HTC’s blockchain-powered Exodus smartphone is a risky bet that needs to...

Experts say you should have 10 times your income saved to retire by age...

Should I Convert to a TSP Life Annuity?

More Americans Are Saving Than Ever Before, Though in Unequal Amounts