Why financial stocks have been beating the market for years, in one chart

The prospect of higher interest rates have been a major contributor behind the volatility seen in U.S. stocks over the past several weeks, but there’s one sector that can’t wait for such an environment.

Financial companies are widely expected to benefit from a higher-rate environment, given the tailwind it provides to their net interest margins (NIMs). NIMs are the difference between the interest that banks earn on the loans they make and the interest they pay out on things like deposits. Low rates can depress their NIM, which can lead to lower earnings.

Jerome Powell, the newly installed chairman of the Federal Reserve, recently indicated it was possible the Fed could raise rates four times this year; investors typically expect either three or four hikes in 2018.

NIMs have risen for six straight quarters, according to data from the Federal Reserve Bank of St. Louis. They currently stand at 3.17%, their highest level since the fourth quarter of 2013.

Limiting the data just to banks that have at least $1 billion in assets, and NIMs are at their highest level since early 2013, and matching levels seen in 2007, according to Torsten Sløk, chief international economist at Deutsche Bank Securities. 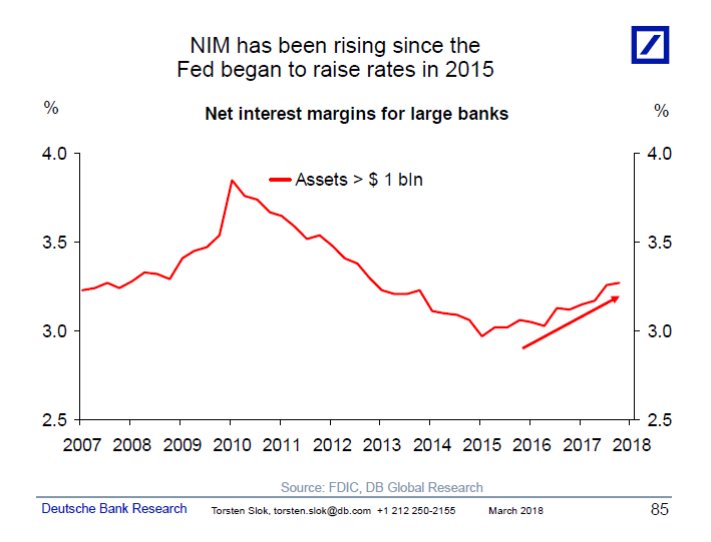 Margins have been gaining ground for three years, a trend that roughly coincides with the Federal Reserve’s first interest-rate increase following the financial crisis, which pushed rates to record lows for years. In the first quarter of 2015, NIMs fell to 2.95%, a level that represented an all-time low, based on data going back to 1984. (NIMs peaked in 1994 at 4.91%.)

Stock futures advance after sell-off in growth and tech

Wall Street can’t keep up with the market

Nasdaq drops 1.9% in worst session since March as tech stocks sell off

Student loan savings – what to do with your money with...

Dell is issuing a security patch for hundreds of computer models...

Signal Tries to Run the Most Honest Facebook Ad Campaign Ever,...

Bitcoin Loses Grip in Climb Up as Ethereum Surges

Dogecoin is blowing up. Invest with caution

Tax refunds on $10,200 of unemployment benefits start in May. Here’s who’ll get them...