In the 2016 campaign, there was no one more loyal to Hillary Clinton than her one-time Senate colleague Chuck Schumer. He defended his fellow New Yorker and the race she ran at every turn.

Which makes what Schumer said about Clinton over the weekend all the more intriguing.
“When you lose to somebody who has 40% popularity, you don’t blame other things — Comey, Russia — you blame yourself,” Schumer, the top ranking Democrat in the Senate, told The Washington Post over the weekend. “So what did we do wrong? People didn’t know what we stood for, just that we were against Trump. And still believe that.”
Gauntlet thrown. 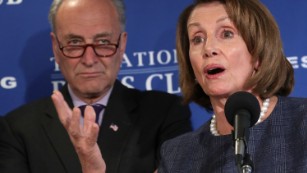 Democrats to pitch ‘A Better Deal’ agenda: Focus on job training, lowering costs
Remember that Clinton has laid her defeat in the 2016 election directly at the feet of Russia’s meddling — via a series of hacked emails — and then-FBI Director James Comey’s decision to re-open the investigation into Clinton’s private email server.
“I take responsibility for every decision I make — but that’s not why I lost,” Clinton told Recode’s Kara Swisher and Walt Mossberg in early June. In a May interview with CNN’s Christine Amanpour, Clinton said: “I was on the way to winning until a combination of Jim Comey’s letter on Oct. 28 and Russian WikiLeaks raised doubts in the minds of people who were inclined to vote for me and got scared off.”
Schumer’s comments to the Post are a direct rebuke of the idea that Clinton has pushed since the election: That she lost because of factors entirely beyond her control, not because of any flaw in her as a candidate or in the message she ran on. (It was “Stronger Together,” in case you forgot.) 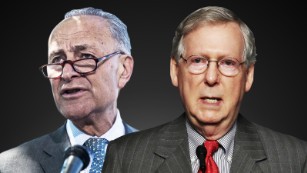 Recess looms over Congress’ busy week: Health care, Russia investigations
Schumer is arguing that Clinton lost because she ran a campaign devoid of any real message other than “I’m not Donald Trump.” Schumer is also saying that if the Democratic Party wants to succeed in future elections, Democrats need to understand they didn’t lose the White House because of Russia and Comey alone.
He has some self-interest in making that argument. After all, Schumer’s interview with the Post was to preview the rollout of the Democrats’ 2018 message: “A Better Deal.” There’s no better way to get some attention for a new message you cooked up than to slam your party’s previous message — and messenger.
Schumer’s critique is born out in the exit polling done in the 2016 election, however.
Neither candidate was at all well-regarded by the electorate. Trump was viewed favorably by 38% of people and Clinton by an only slightly better 43%. What the election came down to was this: Voters wanted change and viewed Trump as the candidate of change. Of the four in 10 voters who said a candidate who could “bring about needed change” was the most important trait for them, Trump won 82% to 14%. That’s the entire election.
That Schumer would be willing to slam Clinton’s campaign — and her defense of that campaign — also speaks to the fact that most Democrats want to move beyond the former secretary of state and the 2016 election. It may be in Clinton’s interest to re-litigate the election to ensure she isn’t blamed, but most Democrats trying to win reelection (or election) next November want to put her campaign far in their rear-view mirror. (Remember that 10 Senate Democrats are seeking reelection in states Trump won last fall.)
The problem with Schumer’s attempt to get beyond the 2016 election is that Democrats remain largely leaderless in the aftermath of an election that no one in the party thought they would lose. Schumer is simply not a well-known enough figure nationally to speak for the party. House Minority Leader Nancy Pelosi is too unpopular among anyone outside of the Democratic base to be that person. Sens. Elizabeth Warren and Bernie Sanders are prominent but cancel one another out somewhat as they both seek to be the leader of the liberal wing of the party. Former Vice President Joe Biden is in the background even as he makes clear a 2020 bid is an option. Former President Barack Obama seems very conscious of not injecting himself into every debate involving his successor.
All of which means Clinton continues to fill that leadership vacuum with a message much more focused on reshaping her own personal narrative than re-positioning her party to persuade voters in 2018.
Facebook
Twitter
WhatsApp
Linkedin
Email
Print
Previous article2 Reasons The Case For Costco Got Stronger Today
Next articleFor Alphabet, a Record Fine is Both a Footnote and a Warning

India’s gold demand fell 30%, but ‘cautious optimism’ may be returning

SINGAPORE — Gold demand in India fell 30% in the previous quarter, but a sense of “cautious...
Read more
Top News

Arizona power must come from 100% carbon-free sources by 2050, regulators decide

Arizona utility regulators on Thursday, in a split vote, approved a plan for utilities to get all...
Read more

U.S. stock futures tumbled early Friday after some of the technology heavyweights came under pressure following their...

The Oculus Quest 2 was preordered five times as much as...

These 3 Dividend Stocks Could Be Hidden Gems for Income Seekers

Chess champion Garry Kasparov who was replaced by AI says most...

How to Save Money on Groceries and Lower Food Waste

4 Questions That Keep Most Pre-Retirees Awake at Night