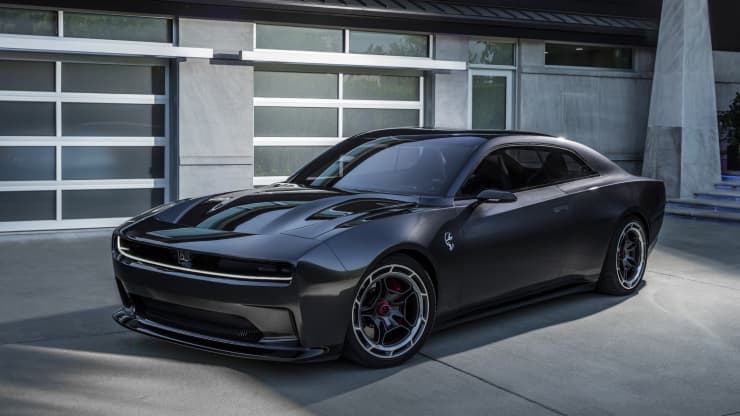 DETROIT — Dodge on Wednesday unveiled a new concept car called the Charger Daytona SRT as a preview of its first all-electric muscle car, expected in 2024.

The two-door coupe is the first look at what the forthcoming vehicle, which will replace Dodge’s current gas-powered Challenger and Charger muscle cars, is expected to look like. The car also features several new technologies meant to make it feel and drive like a traditional muscle car.

“This car, we believe, will redefine American muscle,” Dodge CEO Tim Kuniskis, who’s known for over-the-top vehicles such as the brand’s 700-plus horsepower Hellcat models, said during a media briefing.

The concept vehicle looks like a futuristic, yet retro, version of the current Dodge Challenger with a more aerodynamic, but muscular, design. Most notably, the front end features a large opening for air to pass through, which the company is calling a “R-Wing.”

The front wing as well as the vehicle’s “Fratzonic Chambered Exhaust” and “eRupt” multispeed transmission – names fitting for “Back to the Future” movies – are patent pending, according to the company.

The multispeed transmission and exhaust are especially unique, since electric vehicles drive in only one “gear” and are relatively silent aside from required safety noises.

‘Not a science project’

Automakers routinely use concept vehicles to gauge customer interest or show the future direction of a vehicle or brand. The vehicles are not meant to be sold to consumers.

However, Kuniskis says many of the Charger Daytona SRT’s technologies and design elements are expected to make it into a production vehicle.

The forthcoming EV in 2024 will replace Dodge’s gas-powered Charger and Challenger muscle cars, which the automaker on Monday said would be discontinued at the end of 2023.

The car’s patent pending technologies are meant to retain the sound and driving characteristics of Dodge’s current gas-powered Charger and Challenger for any forthcoming all-electric muscle cars, according to Kuniskis.

While EVs can be fast with a “linear acceleration” that produces astonishing 0-60 mph times, they often lack the driving dynamics that many performance car owners enjoy. It’s a problem auto executives have privately been attempting to solve as the industry transitions to EVs.

The exhaust system on the concept Charger, which Kuniskis said is as loud as a Hellcat engine, pushes sound through an amplifier and tuning chamber located at the rear of the vehicle. He compared it to a wind organ with chambers and pipes.

The eRupt technology, he said, is a multispeed transmission “with electro-mechanical shifting” that “delivers distinctive shift points” like today’s muscle and performance cars.

The innovations could help Dodge retain its performance characteristics as well as its buyers, who have bought millions of Challengers and Chargers over the years, according to Stephanie Brinley, principal analyst at S&P Global.

“It is exactly what you would expect a Dodge EV two-door to be,” she said. “It looks the part, it sounds the part and it’s pretty exciting.”

Much of the concept vehicle was inspired by Stellantis-owned Dodge’s history, according to officials. The name itself — Charger Daytona SRT — is made up of nomenclatures Dodge has commonly used.

The “R-Wing” was inspired by the “nose cone” front end of the 1969-1970 Charger Daytona. And while today’s Charger is a four-door vehicle, the original generations beginning in the 1960s were two-door, like the concept.

The “Fratzonic” exhaust is a reference to a logo Dodge used from 1962 through 1976 called the “Fratzog,” — a word made up by a designer. It features a split deltoid made of three arrowhead shapes that form a three-pointed star.

Kuniskis said some of the design elements and technologies are expected to impact the electric range of the vehicles, but it’s not something Dodge is necessarily worried about.

The 100 MW Dalian Flow Battery Energy Storage Peak-shaving Power Station, with the largest power and capacity in the world so far, was connected...
Read more
Technology

SAN FRANCISCO (Reuters) - Tesla CEO Elon Musk has said a robot business will be worth more than its cars, and on Friday investors,...
Read more
Technology

When SuperSpeed USB was announced in 2007, the branding was a logical differentiator. The term launched with USB 3.0, which brought max data transfer...
Read more

Oil claws back some losses but strong dollar caps gains

5 things to know before the stock market opens Friday