S&P 500 falls as market struggles to recover from multiple weeks of losses, Nasdaq down more than 1% 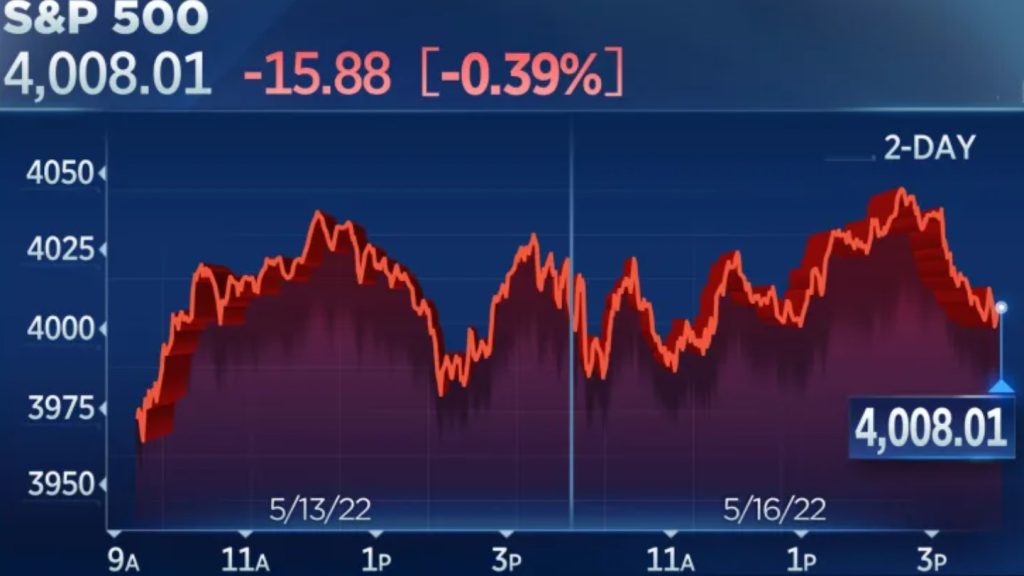 The S&P 500 fell in choppy trading Monday as the broader market index failed to recover from last week’s losses and traders weighed the potential for a U.S. recession.

Tech shares were a drag on stocks. Several cloud companies plunged including Datadog, Cloudflare and Atlassian — each of which dropped 10.7%, 13.6%, and 6.3%, respectively. Meanwhile, shares of electric vehicle company Tesla fell about 5.9%.

Those moves come after a rough week as concerns over slowing U.S. economic growth, interest rate hikes from the Federal Reserve and soaring inflation have dented market sentiment. The Dow posted a seven-week losing streak Friday, its longest since 2001. The S&P 500 notched a six-week slide — its longest since 2011.

“We continue to be transitioning through this interest rate driven repricing,” said Bill Northey, senior investment director at U.S. Bank Wealth Management. “So as the U.S. Treasury yield curve has continued to move higher in anticipation of both higher realized inflation and Federal Reserve policy adjustment, we’ve seen a consistent and broad adjustment to asset valuations that has occurred consistent with those rising inflation concerns.”

Treasury yields have spiked this year as the Fed tightens monetary policy to stave off decades-high inflation. The benchmark 10-year rate started the year at roughly 1.5%. It slipped below 2.9% on Monday and briefly eclipsed the 3% mark earlier this month.

In turn, the major averages have fallen well off their record highs. The Dow and S&P 500 are about 12.8% and 16.8%, respectively, below all-time highs reached in January. The Nasdaq is squarely in bear market territory, down roughly 28% from its November record.

To be sure, some analysts believe those declines may soon point to an attractive entry point for the broader market index, based on a long-term perspective.

“The S&P 500 is quickly approaching a level that, historically, has indicated that future growth concerns are priced in,” Citi analyst Scott Chronert wrote in a note.

Meanwhile, strategists at RBC Capital Markets said in a Monday note that the S&P 500 is at a crossroads as it struggles to find a bottom. If the broad market index holds at 3,850 – a figure close to an intraday low the S&P 500 nearly breached last week – strategists believe stocks are matching the late 2018 drawdown.

“The S&P 500 is still trading as though it’s experiencing a growth scare, a framework that has been pointing to downside in the S&P 500 to ~3,850,” RBC Capital Markets strategist Lori Calvasina wrote. “Current trends in economic forecasts continue to support the idea that this is the right way to think about how far stocks should fall, though we remain mindful that could change.”

Energy led gains in the S&P 500, with the sector rallying 2.6%. Occidental Petroleum was the best-performing energy stock Monday, popping nearly 5.7%. Marathon Oil, meanwhile, gained 3.6%. Those gains came as U.S. oil prices popped about 3% on bets that China would be able to recover from an economic slowdown caused by Covid lockdowns.

Other notable outperformers on Monday included health-care stocks. Shares of Eli Lilly jumped nearly 2.7% after its drug Mounjaro was approved by the Food and Drug Administration to treat Type 2 diabetes. The drug is also being investigated for potential use in the treatment of obesity and overweight. Pfizer’s stock price jumped 1.5%, AbbVie’s stock price was up nearly 1.3%.

Elsewhere, shares of Spirit Airlines jumped 13.5% after JetBlue announced a tender offer to acquire the airline for $30 a share.

Carvana’s stock price edged up just 0.2%. Shares were higher earlier after the used car company issued expectations of significant core earnings in 2023 and outlined a plan to cut costs.

Asia-Pacific markets are mixed as investors search for direction

SINGAPORE — Hong Kong stocks fell as Asia-Pacific markets were mixed on Monday ahead of Australia and Malaysia central bank decisions this week. The Hang...
Read more
Stocks To Watch

Investors are greeting the third quarter with greater trepidation about a recession, and that makes next Friday’s June jobs report a potentially bigger catalyst...
Read more
Stocks To Watch