“If you take the possibility of a trade war with China off the table for a few months that allows the market to work its way higher,” said Ed Keon, chief investment strategist at QMA. “This has been one of the market’s biggest worries. If you put it on the back burner, it’s a good thing.”

Friday’s report comes after National Economic Council Director Larry Kudlow confirmed on Thursday earlier reports to CNBC which stated that China and the U.S. would hold a fresh round of trade discussions later on this month.

China and the U.S. have been engaged in a trade spat recently with both countries slapping tariffs on several of their imports. The ongoing trade tensions have left investors fearful than any escalation could results in a global economic slowdown or a hit to corporate profits.

“The only thing that’s basically keeping us from getting there at this point is the trade and the geopolitical risks,” Lakos-Bujas said. “If you get any sort of softer rhetoric there … I think the market could actually move higher by a few percentage points easily. And relatively quickly.”

U.S. and Chinese officials are scheduled to have “mid-level talks” in Washington next week.

It has been a turbulent week for the market as Turkey’s ongoing geopolitical and economic issues weighed against positive headlines on U.S.-Chinese trade negotiations.

The Dow recorded triple-digit moves every day this week, but managed to close higher for the week, along with the S&P 500. The Cboe Volatility index, widely considered the best fear gauge on Wall Street, hit its highest level in more than a month earlier this week. 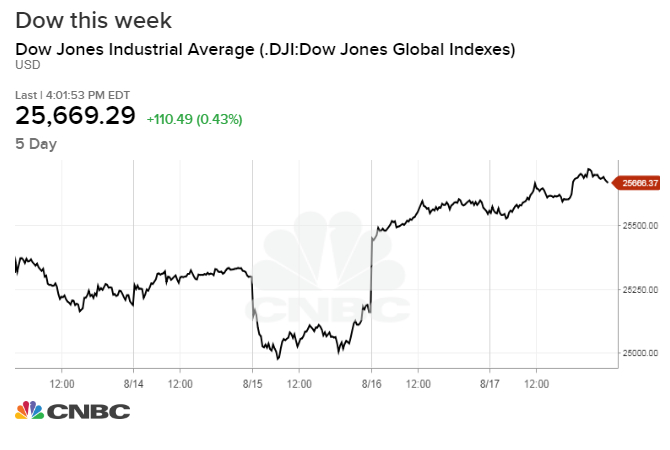 Turkey’s currency, the lira, hit an all-time low against the dollar on Monday. The currency bounced off those lows but then resumed its decline on Friday amid fears of additional sanctions from Washington. The U.S. warned Turkey it would impose more levies if American pastor Andrew Brunson is not released; he has been detained in Turkey since 2016.

The threats sent the lira down by about 3.7 percent.

The lira has also been under pressure because of Turkish President Recep Tayyip Erdogan’s tight grip on the country’s central bank. Erdogan has said he wants interest rates to remain low to keep Turkey’s growth rate high, despite surging inflation in the country.

“With inflation running quasi out of control, the central bank won’t raise rates high enough to choke it off, and so the lira falls, and it will continue to fall until that occurs,” said Tom Essaye, founder of The Sevens Report, in a note. “That’s because the central bank has become a political arm of the prime minister, as have many other parts of the Turkish government.”

“And, therein lies the problem. At the heart of the Turkish tragedy is the fear that Erdogan has become a quasi-dictator, enforcing his political will on bodies best left independent (e.g. central bank),” said Essaye.

Bitcoin and U.S. tech stocks are viewed by investors as the biggest market bubbles right now, according...
Read more
Stocks To Watch

Clean energy will be a top theme in ETFs this year, market analysts say

Clean energy could be the ETF theme of the year. That’s what two market...
Read more
Stocks To Watch

Tuesday was a strong day for the stock market, with investors hoping that the near future could...
Read more

Tuesday was a strong day for the stock market, with investors hoping that the near future could...

Don’t miss these cyclones on Jupiter, and more

About 150 Cadillac dealers take GM buyouts rather than invest in...

10 Small Changes To Stay On Track With Your Retirement Goals

4 Mistakes to Avoid When You’re Paying Off Debt

This Common Mistake Could Cause Your Retirement Savings to Fall Short