Not too shabby, considering that the Federal Reserve on Wednesday lifted rates for a second time in 2018, signaling, perhaps, two more increases to key interest rates remaining in the year, while the European Central Bank on Thursday submitted a road map for unraveling its crisis-era, multitrillion-euro bond-buying initiative, though at a less aggressive clip than markets had anticipated.

Against that backdrop, the stock market appears unbowed, with signs of an uptrend that could take the Dow and S&P 500, which have been in correction territory — typically defined as a drop of at least 10% from a recent peak — since February.

Here are a few developments investors may consider as the market attempts its next move in the coming weeks:

For one, the Dow Jones Transportation Average, which tracks the performance of companies ranging from railroad operator CSX Corp. CSX, +1.15% to airline giant United Continental Holdings Inc. UAL, +1.19% , is knocking on the door of an all-time high. The gauge, often viewed as an indicator of the health of the market because of the role transportation plays in a vibrant economy, stands just 2.6% short of its record close set on Jan. 12 and is up 9.4% since putting in its 2018 nadir in April, according to WSJ Market Data Group.

The performance of transports is particularly notable because the threat of a trade war and an uptrend in crude oil CLN8, -1.81% should otherwise proof a headwind for the group.

Nonetheless, the DJT finished up 0.6% on Friday, even as a trade spat between China and the U.S. intensified, with Beijing striking back against Trump’s decision to implement tariffs of 25% on $50 billion in Chinese products.

So-called Dow theorists see upward momentum in both the Dow industrials and transports as forming a bullish pattern. There is still more to work to do for those gauges to trigger an outright buy signal, however. Currently, the Dow stands about 5.7% from its Jan. 26 record high, while the S&P 500 is 3.2% shy of its late-January apex.

Meanwhile, one market measure of volatility, the Cboe Volatility Index VIX, -1.16% , known as the VIX, has been trending decisively lower since a surge in February. The index, which reflects bullish and bearish bets on the S&P 500 in the coming 30 days and tends to fall as stocks rise, points to dimming expectations for an abrupt tumble in stocks because stocks tend to decline faster than they climb. The VIX closed at 11.98 on Friday (see chart below), well below a historic average between 19 and 20 and 68% below its Feb. 5 close at 37.32. That all suggests that a level of complacency may be taking hold in the market.

That said, the road ahead for the market looks fraught. Though tariffs have thus far not resulted in lasting damage, the biggest threat is that an escalation of tensions could eventually hobble global economic growth.

“The escalation of trade tensions could prove to have dire consequences on both economies. We estimate that if the U.S. were to impose trade restrictions on $150 billion of imports from China, and China were to retaliate in kind, the hit to each economy could reach 0.3-0.4%,” wrote Gregory Daco, head of U.S. economics at Oxford Economics, in a Friday research note, referring to the impact on gross domestic product (see chart below). 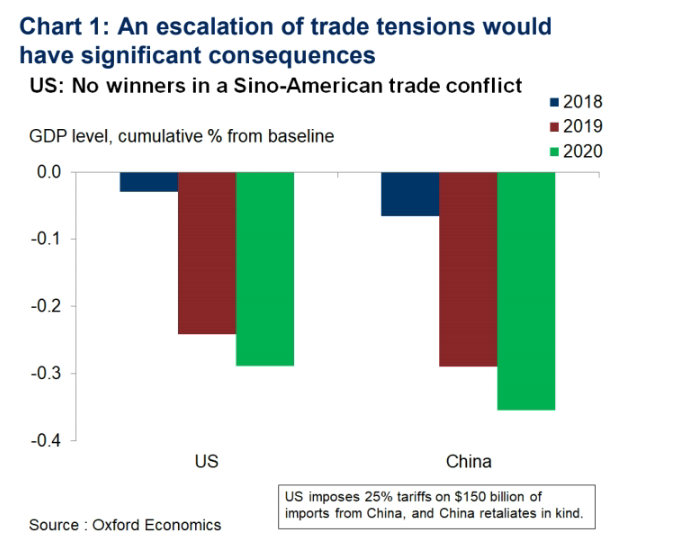 Meanwhile, persistent worries about the possibility of an inversion of the so-called yield curve, a line plotting the yields of Treasurys from shortest to longest maturities, have dogged investors.

Normally, short-dated yields are lower than longer-dated paper because investors tend to demand richer yields for lending further into the future. However, because many investors harbor concerns that the current economic expansion can’t last for much longer as it nears the ninth consecutive year of expansion, investors have been buying 10-year Treasury notes TMUBMUSD10Y, -0.59% , pushing yields, which move inversely to prices, lower. Meanwhile, 2-year Treasurys TMUBMUSD02Y, -0.65% , more sensitive to the Fed’s rate hikes, have seen some selling off, nudging yields up.

So-called yield-curve inversions, in which shorter-dated debt offers a richer yield than longer-dated counterparts, have been accurate predictors of recessions.

The spread between 2-year paper and 10-year stands at 36.9 basis points, putting it at its narrowest since around 2007. It hasn’t helped that monetary policies in Europe, Japan and elsewhere continue to take a less aggressive path, compared with the U.S., a factor that can drive investors to the relatively richer yields of Treasurys, adding to rate pressure there.

Still, “there is a difference of opinion among Fed officials of the significance of the flattening and potential inversion of the curve,” noted Marc Chandler, global head of currency strategy at Brown Brothers Harriman, with some members expressing the view that an inversion of the curve doesn’t necessarily have to result in a recession.

A big question for markets may center on the impetus for a fresh rally. Markets have stalled out in recent trade, with the year’s second quarter approaching an end.

Mark Newton, technical analyst and founder of Newton Advisors, said that “there have been signs now for the last few days of markets starting to stall out and gradually roll over, with financials and industrials falling by the wayside and technology getting up to areas of importance that should cause this sector to consolidate and pullback.”

Chandler said the end of the quarter, when buybacks tend to taper, may remove a key driver of stock purchases. As the quarter draws to a close, and the earnings season kicks off, buybacks could slow, he wrote in a recent blog post. “This may be offset by the savings drawn in U.S. equity market.”

Another event that is likely to be a significant influence to the broader market is a key meeting of the Organization of the Petroleum Exporting Countries set for June 22.

OPEC, along with 10 big nonmember oil producers led by Russia, agreed in late 2016 to hold back crude production by about 1.8 million barrels a day beginning in 2017. That pact is set to expire at the end of this year, and investors will be keenly watching to see if the cartel agrees to extend the agreement, which has helped fuel a rise in prices of West Texas Intermediate oil, the U.S. benchmark, and Brent LCOQ8, -0.84% , the global benchmark.

New investors beware: The easy money you made in the stock market probably won’t continue

The past year or so has been one of the oddest periods ever for the stock market...
Read more
Stocks To Watch

The ongoing JCPOA discussions, involving European countries, Russia, Iran, and, on the sidelines, the U.S., are being...
Read more
Stocks To Watch

Market bull predicts stocks could surge another 8% by July, but lacks clarity on rest of year

With stocks at all-time highs, one of Wall Street’s biggest bulls is taking his optimism up a...
Read more

Market bull predicts stocks could surge another 8% by July, but...

With stocks at all-time highs, one of Wall Street’s biggest bulls is taking his optimism up a...

Facebook plans to go after Clubhouse — and podcasts — with...

DuckDuckGo Comes Forward With A Chrome Extension To Block FLoC, The...

US investigates code testing hack that could affect thousands of companies

New grads: Why you need a good credit score after college and how to...

The Perfect Storm for Retirees