The home improvement market is cyclical, but Home Depot (NYSE:HD), the industry’s leading retailer, always seems to stay on top through the ups and downs. Its consistent financial performance has translated into awesome returns for investors who stuck with the company over the long term.

Home Depot’s stock is up roughly 900% in the past 15 years if you include dividend returns, compared to 200% for the broader market: 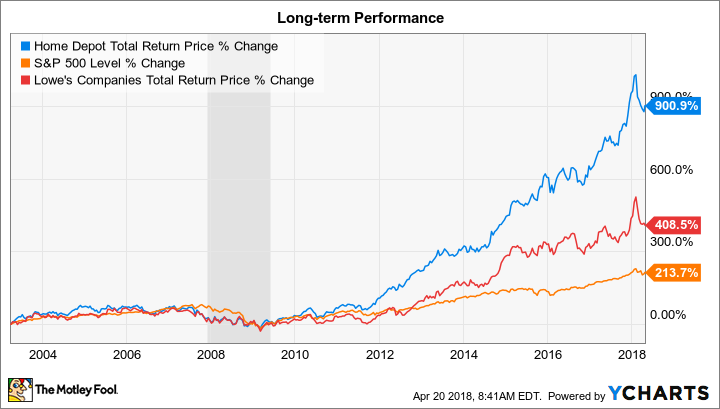 Those gains are even more impressive when you consider that they were held back by a massive recession in 2008 and 2009 that sent the home improvement market plummeting. Let’s look at whether Home Depot has the potential to continue that epic run over the next decade.

The retailer’s recovery from the market downturn has been broad-based. Sales have soared as demand for home improvement materials expanded. But investors have been even happier with evidence that Home Depot isn’t simply depending on a rising market to lift its results. Instead, it’s widened its lead against peers in the past decade.

Home Depot’s comparable-store sales rose by 7% last year to trounce its biggest rival Lowe’s (NYSE:LOW) and its 4% gain. Operating margin passed 14.5% of sales, too, compared to 9% for Lowe’s. These figures suggest that Home Depot can routinely soak up more than its fair share of growth in the industry, which is a key asset to look for in a market-beating stock.

The same impressive story holds when it comes to finances. Home Depot’s return on invested capital of 31% not only far outpaces Lowe’s, but also makes the retailer one of the most efficient businesses on the stock market today. Management has used the growing cash haul to great effect in the past decade, too. The company has invested heavily in building out its e-commerce infrastructure, while directing the excess cash toward shareholder-friendly moves like stock buybacks and a quickly rising dividend.

The market-thumping growth and significant cash returns together suggest this stock will continue to deliver for investors. There are risks to a Home Depot holding, though. A housing market downturn is certain, for example, but the business pullback that would follow would likely be more of a test of investors’ patience than anything else.

The bigger risk in buying such a stellar business is paying too high a price. That’s a clear possibility here, given that Home Depot’s valuation is about twice that of Lowe’s on a price-to-sales basis. The gap is smaller but still significant in terms of earnings: You’d have to pay about 19 times expected profits to buy Home Depot, compared to 16 times for Lowe’s and 17 times for the broader market.

Who wants to be a millionaire?

Home Depot recently passed $100 billion in annual sales, and management is aiming for sales growth of around 4% over the long term. Its store base is fairly steady, too, so most of the gains will have to come from rising traffic at its existing locations, plus a growing contribution from an e-commerce channel that’s now worth more than 6% of the broader business. Earnings should grow at a faster pace than revenue, thanks to rising profit margins and a shrinking share count.

Ultimately, Home Depot’s $200 billion market capitalization, and its stock market rally over the last decade, suggest investors aren’t likely to see soaring returns in the short term. Yet this retailer runs one of the most attractive businesses on the market, and that prime positioning should translate into impressive shareholder gains over time.

Stock Markets In the past week, sector leadership shifted to economically sensitive sectors that...
Read more
Stocks To Watch

Stocks have had a tough go of it these past two weeks as rising 10-year yields weigh...
Read more
Stocks To Watch

Longtime trader Art Cashin told CNBC on Friday that investors should brace themselves for a period of...
Read more

Trump, Barr, and the FBI do not need Apple to unlock...

Many Americans say their financial situation is worse since the Great...