Physicists report electron is round—what does that mean? 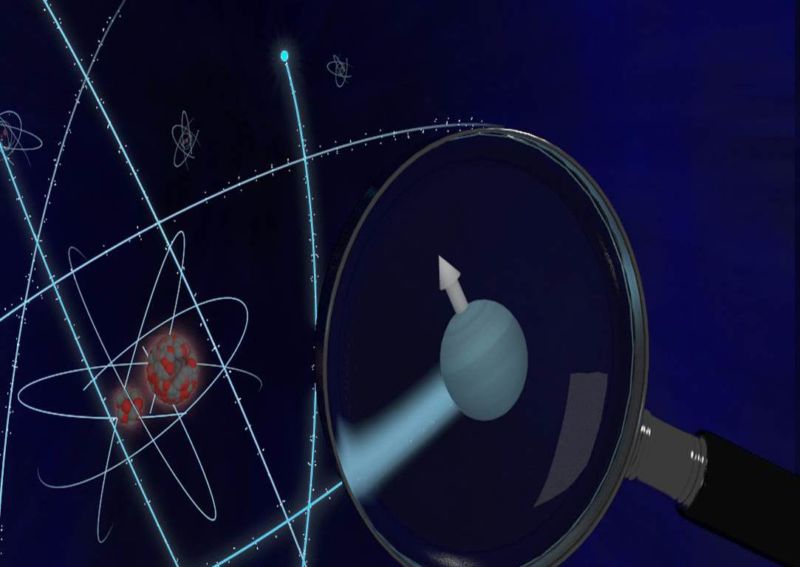 Last week, or maybe the week before (the days fly by so fast), reporters were all agape with surprise that the electron was round. Very round. I put it on my list of things to write about, took a deep breath, and dived back into the painful process of grading. Grades are now done, and the electron is still round.

What makes a round electron so important? And what do we mean by round anyway?

It’s all about symmetry

The electron is, in most conceptions, a perfect point particle. It has no internal structure—it is simply a point with a negative charge, some angular momentum, and a tiny magnet.

Those last two, ahem, points are where the point-like description of the electron goes wrong. A magnet has poles, and that suggests that the electron must have some internal distribution of charge that is elongated along the axis of a magnetic field. That suggestion, it turns out, is hard to quantify. It takes a reasonable amount of theoretical heavy lifting to show that there is an elongated charge distribution that becomes noticeable at a non-zero electric dipole moment.

That leads to an obvious question: what is an electric dipole moment? Essentially, a dipole moment describes how an elongated distribution of charge is subject to torque (a force that rotates the charge distribution).

To get a handle on that, let’s go up in scale to a metallic football (of the American football variety). The football is hanging in space with the long axis of the football vertical. Imagine that I load the football up with electrons. The charges don’t like each other, so they move as far apart from each other as possible. In a shape like a football, moving far apart means that the charges gather at the pointy ends of the football and stare angrily at each other like fans of rival teams.

Being off-center along the equator of the football will cause it to rotate, too, but that effect is much weaker. The distribution of charge is much more symmetrical around the equator. So, our charged football is more sensitive to vertically off-set beams of electrons.

Searching for the dipole moment of an electron is, basically, looking for this difference in sensitivities. The latest round of experiments look for tiny shifts in electron behavior when they’re subject to enormous electric fields. Essentially, we are looking for the torque applied to the electron via non-spherical charge distribution.

Round, or a football?

Our electron, according to theory, is actually a football with charge at the point ends. Theory predicts that the “length” of the electron-football is about 10-38cm. That’s pretty tiny—so tiny that the current measurement can’t measure the dipole moment, hitting the wall at 10-29cm. Given experimental limitations, it isn’t that surprising that the electron looks round, and physicists didn’t find the electron’s electric dipole moment.

Then where is the news in all of this? The failure to measure the electric dipole moment has killed the hopes and dreams of countless theoretical physicists who had been hoping it was within the realm of what we can measure. That is the important point.

Why were they hoping? The Standard Model predicts the tiny electric dipole moment of the electron, but it also leaves us with a number of open questions. Why are the fundamental constants the values that they are? How can the Standard Model be reconciled with gravity? If dark matter is a particle, can we fit it into a modified Standard Model?

The problem, of course, is that there isn’t much in the way of data to hang these models on. The Standard Model is pretty close to perfect in terms of explaining the experimental data we currently have.

I won’t call the wild speculation of theoretical physicists wild speculation. The extensions they’ve devised have to generate predictions of some sort. The least wild of these models do just that. And, for some of those models, one prediction is that the electron’s electric dipole moment would be large enough to measure. Those models are now pushing up daisies, killed by a nasty collision with data.

The shift from favored mass range to unfavored mass range moves some theories from aesthetic works “so beautiful they could not possibly be wrong,” to “so ugly I want to hit it with a shovel.” Maybe some physicists will do just that and put a few models out of their misery.

Microsoft started testing its xCloud gaming platform on iOS in February, but things have been complicated since...
Read more
Technology

The COVID-19 pandemic doesn't seem like it'll be going away any time soon. In order to help...
Read more
Technology

Microsoft is now allowing Windows 10 users to run Android apps side by side with Windows applications...
Read more

What stock-market history says about a falling dollar

A falling U.S. dollar is getting a lot of attention from stock-market investors, and according to the...

Microsoft ends tests with xCloud gaming platform on iOS due to...

Virginia is the first state to launch a COVID-19 contact tracing...

Microsoft integrates Android apps into Windows 10 with new Your Phone...

Want to work for Amazon? Now you can do it from...

December historically is the most wonderful time of the year for...

Decided to Take Social Security? Do These 3 Things First

Some stimulus checks didn’t include $500 for dependents. Now the government is sending those...